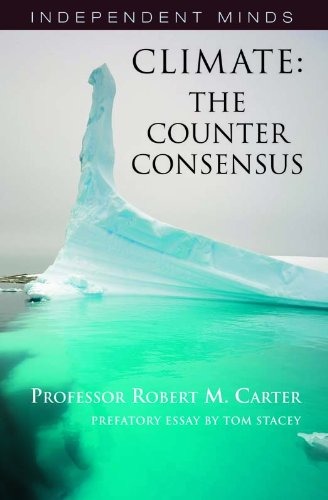 The Counter Consensus covers the very important point that truth isn’t measured by consensus, even though consensus is commonly touted as some kind of proof.

Science, it is said, progresses one funeral at a time. Because people tend to take their ideas and what they’ve been taught to the grave.

Prior to finding anti climate books, I had a whole collection of books saying the world is ending because of *us*. I didn’t realize that most of these authors were not even scientists, and many of the PHD authors didn’t even work in the physical sciences, let alone climatology or geology or many of the other sub disciplines affected by the climate change model. On top of the logical inconsistencies with the global warming theory, and the false analysis of data, there is also deliberate fabrications of data, deliberate propaganda campaigns promoting *we are warming the earth*, and a deliberate illusion of a scientific consensus on the matter.Highly recommend everyone understand that climate change is nothing more than another giant misunderstanding, deliberately created ultimately to gain more power over us. The campaign is for more tax, tax on you and your breath and your business.

In 2019 it was publicized that “chemtrails” were being sprayed in skies around the world, to reflect the sun and stop global warming. Whatever the actual reason for chemicals in the sky doesn’t matter so much to me as the fact that fake events are used to justify these things.

In pretty much every book store in the world you will find books about “climate change” or “global warming”.

It’s extremely unlikely that you will find this kind of book, or any book that argues against the mainstream theory of the day.