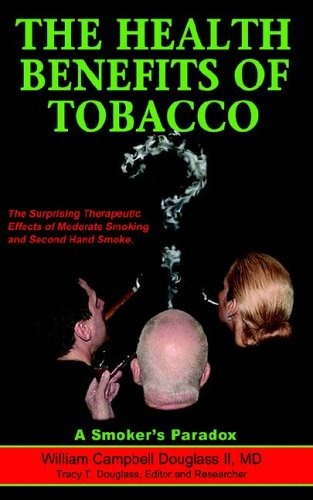 I’ll bet that most people have no idea there is any disagreement about the mantra “tobacco is the worst thing ever”.

We are led to believe, by decades of fierce, vitriolic propaganda, that smoking causes every disease known to man.

We can be forgiven for not knowing there was a debate, since this is the most condemned plant on Earth.

The truth is, mainstream science itself has ample evidence of actual BENEFIT of tobacco use. Worse, it appears that the agenda against tobacco trumps researchers ability to honestly examine their own data, which shows no strong case for tobacco being the primary contributor to the diseases they’re studying.

In the alternative health business, we disagree with almost everything the mainstream medical world says about everything - yet most of us parrot the government-sponsored party line that “OF COURSE/ EVERYONE KNOWS smoking is THE WORST”.

I never believed that smoking was the biggest contributor to disease, especially as smoking rates have declined over decades in the west and chronic disease continues to rise.

There is a lot to say about this and this book does a good job at summarizing the research. I will admit that the author is rather obnoxious, and a good edit would have taken out the name calling. Nonetheless, this is a book everyone should read. We should be aware of the junk science propaganda that our tax dollars pay for, and we should understand the facts before blindly agreeing with the government.