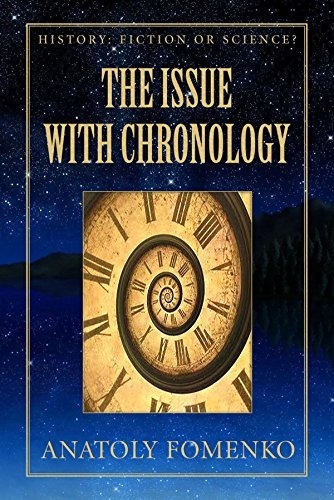 The Issue With Chronology

I have not been so impressed by any book in a very long time.

Fomenko and his colleagues present a truly formidable case that “ancient” history, as far as we know, does not exist.

It would be impossible to summarize their case in this caption, and I have only read 2 of these books in the series of 22.

Fomenko has many critics. I am convinced that there are only 3 possible reasons to reject his work.

2: they did not understand it.

3: the most likely case, they are so offended by the radical revision of history that they refuse to actually examine the case with an open mind.

Having read many detailed criticisms of Fomenko, I am convinced this last reason is the reason most people haven’t heard of this revised chronology. In my opinion, this rejection is desperate, pathetic, and requires such cognitive dissonance that it constitutes an academic crime.

It has become somewhat taboo in modern times to use too many references, but with such a radical theory I think Fomenko did the right thing in providing EXTENSIVE references, which back up his case and also which tell the mainstream story. He has been accused of cherry picking, yet he has been working on this theory more than 30 years and it is exceptionally well referenced - nearly 1500 references comprising a bibliography that is nearly 100 pages long..Fomenko has been accused of being Russian-centric, but this first volume in the series does not show that. If anything there is an Italian bias.

I am excessively excited to read the rest of the series and I would call this book mandatory reading for everyone with an even passing interest in history, or conspiracy theories.

It is written in an academic language and translated from Russian, and though it is absolutely still comprehensible, it’s not the easiest read. I read Sylvain Tristain’s “Re-Dating Ancient Greece” before this and I felt it really made me prepared to read and understand Fomenko, as Tristan did a great job of summarizing Fomenkos theory and methods.