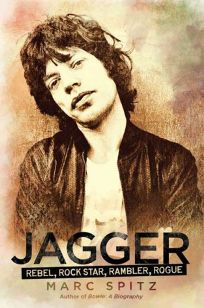 Though this is not the most sensationalized version of Jagger's life that I have seen, it most definitely reads from a fans perspective.

The book was relatively short for a biography, especially for someone with such a long and successful career. There is a lot to say on Jagger himself and of course on the Rolling Stones, but I really feel that detail was sacrificed for pace here.

In Rolling Stones fans there is sometimes a heavy lean toward either Jagger or Richards, and I do feel like this book somewhat diminished Richards' role in the story.

Having read Richards' autobiography "Life" (and have reviewed it here), I do feel that this book is skewed more toward the public version of the story than reality.

Nearly everyone who knew Jagger and wrote about him, at some point mentioned his vanity, self absorption, and other traits that one might say make him out to be not such a good person. A balanced biography has to include these, and though there was brief mention of the colder parts of Jagger's personality, it was very much glossed over.

Jagger's flaws are part of what makes him an interesting person, and when they are taken away we are left with a very one-dimensional character, which is why the Jagger in this book does not feel like a real person.

Biographies can be both useful and interesting. The utility is learning from other people's mistakes and gaining from their wisdom, but when the person being written about is stripped down to a simplified, sanitized version of themselves, and does not participate in the book, then I fail to see how we can gain much of anything from it.