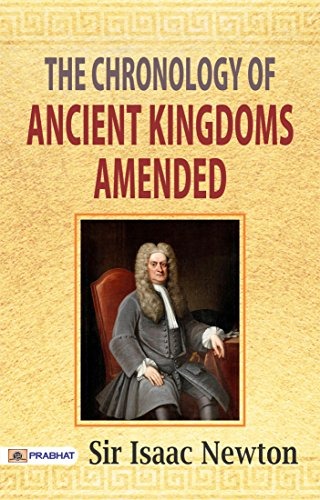 Though this book was very interesting, I am not going to recommend it.

It is a very difficult read, and it is unfinished, as Newton died before he had worked his theory out. I and others believe he was pretty far off the mark.

Newton didn’t mean for this to be published, at least not until it was finished. Apparently he was upset when people published pieces of it that he had shared with them privately.

The mainstream basically says that he lost his mind at the end and we should just disregard this work. I don’t think so. He was definitely onto something. And I do believe we can pinpoint his major mistake.

Hopefully it doesn’t sound too bold to say that I know better than Newton, but in this case I feel his biggest mistake was merely to call out the “ancients” for pushing their histories back into deep antiquity, rather than questioning the writers closer to his time who created most of this “history.”

For example, he takes Herodotus’ history at face value, and he does find a ton of holes in it. But he doesn’t question who Herodotus actually was, when he actually lived, and why we don’t have the originals of any ancient texts.

Maybe he didn’t have time to move beyond the BC era, because if he did I am sure he would have come to similar conclusions as Anatoly Fomenko and others who call much of the ancient tales simply products of Renaissance writers.

Space doesn’t allow a thorough deconstruction of these ideas here. But suffice to say that you should take note that one of the greatest minds in history spent years finding holes in the standard chronology.

Newton was a hermit and was unbelievably well read. He read in Latin and Greek as well, and so he was able to look at many historical texts without translations. This actually should have made him question the age of these stories because the Greek language itself is highly suspect for being much more recent than is said. I recommend my video “Did Ancient Greece Exist?” here on IGTV or my YT TheRealNotus for more depth on this.

You don’t need to read or own this book. It’s tedious and again incomplete. But you must note that Fomenko and modern YouTubers are not the only ones questioning this.

Note: if you DO buy this, check the page count. My copy was under 100 pages but other copies are over 250. Of course I bought the cheapest one and it was a bad move - tiny text crammed into wide margins, made an already difficult read even harder.