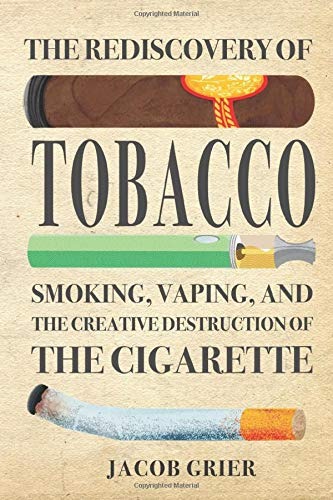 The Rediscovery Of Tobacco - Jacob Grier

I have mixed feelings about this book.

I liked his writing style, and he went into great detail on how smoking bans affect the most vulnerable people in society (the poor and disabled, who smoke the most), and small business owners.

But I have a big problem that he clearly understands the frauds involved in the secondhand smoke “science”, yet believes all of the claims about firsthand smoke.

Further, he spent a long time praising vaping for being a healthier alternative to cigarettes, yet added an addendum saying “as this book went to press new research came out suggesting vaping might not be as good as we think” - this negates a big part of the book, and vaping is far too new for us to have any decent research on anyway.

I think the book would have been much better if he entirely ignored the question of health. His sociological exploration of smoking and the anti smoking crusades were great, but his venture into health questions was quite confused.

I do sometimes recommend books that I completely disagree with, but in this case half is good and half is nonsense. I’d rather recommend “Tobacco: a cultural history of how an exotic plant seduced civilization” by Iain Gately, for the history of tobacco, and “Smoke Screens: the truth about tobacco” by Richard White for a more thorough and confident exploration of the health implications.

One other minor problem I had was that the title really doesn't seem to match the book. It wasn't really about a rediscovery at all...