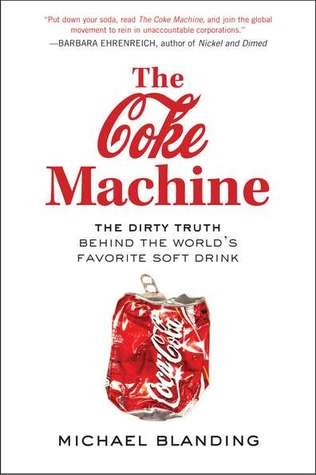 I was initially going to give this book a very good review.

I was totally expecting an obviously anti-coke, liberal environmental tome - Silent-Spring- or Al-Gore-esque.

But the first half was very tasteful, very respectful, and I felt a very objective history of the company.

I was very pleased with the first half, and hoping we would continue in this same broad scope into the modern time...But part 2 takes us very close up and personal to the individuals involved in the current union and human rights and environmental issues with the company.

I understand and expected this book to be anti coke. I was expecting the case to be made on broad terms. I think it was very well set up for this conclusion.

But instead the author wants to make the point that the broad historical practices and philosophy of the company has lead directly to the very specific issues now.

I get it. And the point was made. But these felt like separate books. And the counter claims made by the opposition characters in the second half, are not elaborated adequately.

If this book were split into two, it would have time to develop both points and conclusions. But this book already ran long, and had nowhere near enough scope, in my opinion, to target the specific issues the author wanted to.

The author gave up their objectivity quickly in the second half, and I personally felt manipulated by the first half at that point...I don’t like the tricks. Write an environmental tome, or write a history book. Don’t sell me one and hit me with the other.